Decline bench press is usually ignore by many gym goers while people usually do flat bench and mostly flies for their chest.There is also a myth that doing decline bench press may flatten your chest but in reality doing Decline Bench will maybe be more beneficial than the standard Bench Press which will build chest strength and chest size.(ALSO SEE 3 reasons why your bench is weak).

I will outline benefits of decline bench press, disadvantages and how to perform this type of bench press in 2022.

Performing this type of bench press at the gym usually targets and puts focus on the lower pecs compared to doing flat barbell bench press.

This does not mean that you do not use your pecs on the flat and incline bench press but doing incline and flat bench doesn’t put that much focus on your lower pecs then decline. It is also a good thing to change exercises around in the gym to see progress in growth and strength to your chest muscle which will have a positive effect on your chest strength and size.

The bench press puts the least amount of pressure or stress on your shoulders to a lesser degree then flat bench and back since pecs are mostly targeted.

Usually with flat barbell bench press there is pressure on the mid back and should which could lead too shoulder pain or back pain in the long run when doing flat bench press for chest.

Some other benefits of decline bench press are:

Simple steps on how To Decline Bench Press

-Always get someone to spot or support you when you are decline bench press.

-Always do a weight you comfortable with or the weights could hit your neck or head if the bar comes down when the weights are too heavy for you which could cause serious damage.

Despite the fact that the lowered position of the decline bench press has intentions of boasting your range of motion, you can stunt that range if your grip is too wide.
Take this rule into account, your forearms should be pretty much vertical at the bottom of a rep, with the hand or arm passing above the level of the shoulder grip for standard decline bench press.

The bench press activates the anterior deltoids (front shoulder muscles) but usually doing declined press will maybe not focus that much on deltoids.

The Main downside of decline is that it takes time to get used to the exercise since the 15 to 30 degree angle adjustment is required which is not the most comfortable position that you will ever do an exercise at the gym.

The muscles that A Decline Bench Press Work

Several muscles are activated when doing this bench press which are:

These muscle are located at the back of your upper arm which is used to extend the forearms.

They are mostly used a lot when doing decline bench press which strengthens them and allows you to perform better at other exercises in the future when it comes to working out your triceps.

That Muscle is located in your upper chest which includes both the upper and lower parts of the chest area.That is what makes decline so unique and different is that bit works the entire pectoral major.

These muscles are located in front of the shoulders. Many bodybuilders and athletes discovered that conditioning and activating this muscle allows you to use up less energy and avoid injury in their day to day activities and at the gym which is a bonus.

By strengthening your shoulders you will avoid injuries and be able to lift heavier weights at the gym.

You do not need a barbell to do decline bench there are variations that i will show and explain to you.

This type is very similar to the barbell decline bench but only each hand works independently holding the dumbbells in your separate hands.

Always start with light dumbbells to get comfortable with this exercise because this type of decline bench press is more dangerous then using the barbell.

There might be a supportive machine where you can do decline bench which is a safer choice where you just move your bench under the machine and put on the desire plate weights on the barbells attached to the machine with support of side rails. 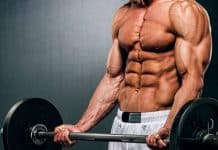